We live in an era of fashion evolution

Trends come and go, needs change, priorities evolve and men take on new roles and responsibilities. In the face of this changing and unstoppable reality, fashion continues its course, adapting stylistic concepts and transforming itself into an art at the service of society. After a brief look at the history of fashion, in the following post we talk about the constant evolution of this discipline nowadays and how Torre Uomo reflects it in its collections. Will you join us?

The 21st century brings with it an important evolution of the word fashion, where traditional patterns are recovered, and incorporating key concepts such as innovation, art, integration and sustainability. But to understand this context, it is necessary to look back at how fashion has been a catalyst for human culture and customs throughout history.

The concept of fashion as we know it today emerged during the historical period of the Renaissance, specifically in the 15th and 16th centuries, with the rise of tailoring professionals to who was given for the first time free rein to their creativity; later on, the French Revolution brought uniformity in the way men dressed. In the 19th century, the sewing machine was invented and the figures of the dressmaker and the tailor emerged as important trendsetters. In addition, the figure of the model was incorporated to show off and advertise the clothes and new textile fabrics were created, such as knitwear, which allowed for an important innovation in stylistic proposals.

At the beginning of the 20th century, fashion underwent a true revolution. Unisex garments, mass production and the popularization and globalisation of fashion throughout society were born. Already in our era, it seemed that it had reached its maximum esplendor in terms of industrial and social milestones, so creativity, innovation and the reinterpretation of existing concepts gained strength. Fashion thus entered a stage of pure evolution, where techniques, fabrics and usability of garments are taken to their maximum exponent. Where brands focus on generating and enhancing identities and where the way of dressing is another expression of style and personality.

Nowadays, mythical garments are being revived and old classics that played an important role in the history of fashion are being recovered. Updated and improved garments, with the aim of responding to the different daily and human needs. Collections that aim to cover the different stages and important moments in people's lives.

This is basically the philosophy of the brand Torre Uomo, strongly reflected in its 2022 collection. The evolution of fashion and men's style trends is the guiding thread of its Evolution collection, an irreverent proposal designed for men who know what they want and have the audacity to wear something different. 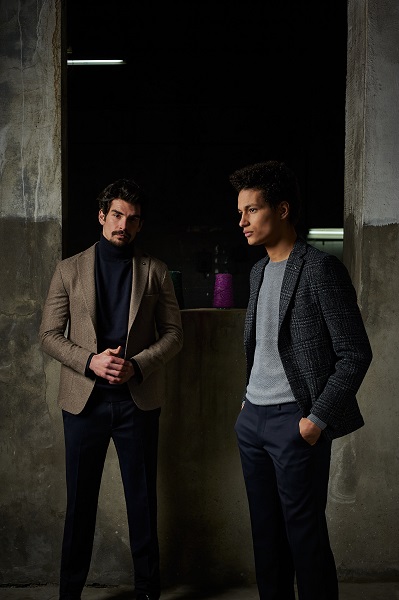 Evolution represents a relaxed, but at the same time avant-garde way of dressing, using the highest quality wools, linens and cottons, mostly blended with spandex, creating more comfort in unstructured, slim fit styles. It stands out for its harmonious, fresh and modern colour palette, highlighting burgundy, blue or beige, with subtle patterns or checks that blend in with the base of the garment. Embossed textures are another of the characteristic elements of this collection, which elevates the trend to the highest level.

Evolution is a clear example of the stylistic evolution that has taken place in our century and in which the fashion industry continues to be immersed. An unstoppable evolution that keeps its engine running to the sound of an increasingly active, dynamic and demanding society. To the sound of a man who is increasingly clear about where he is going.